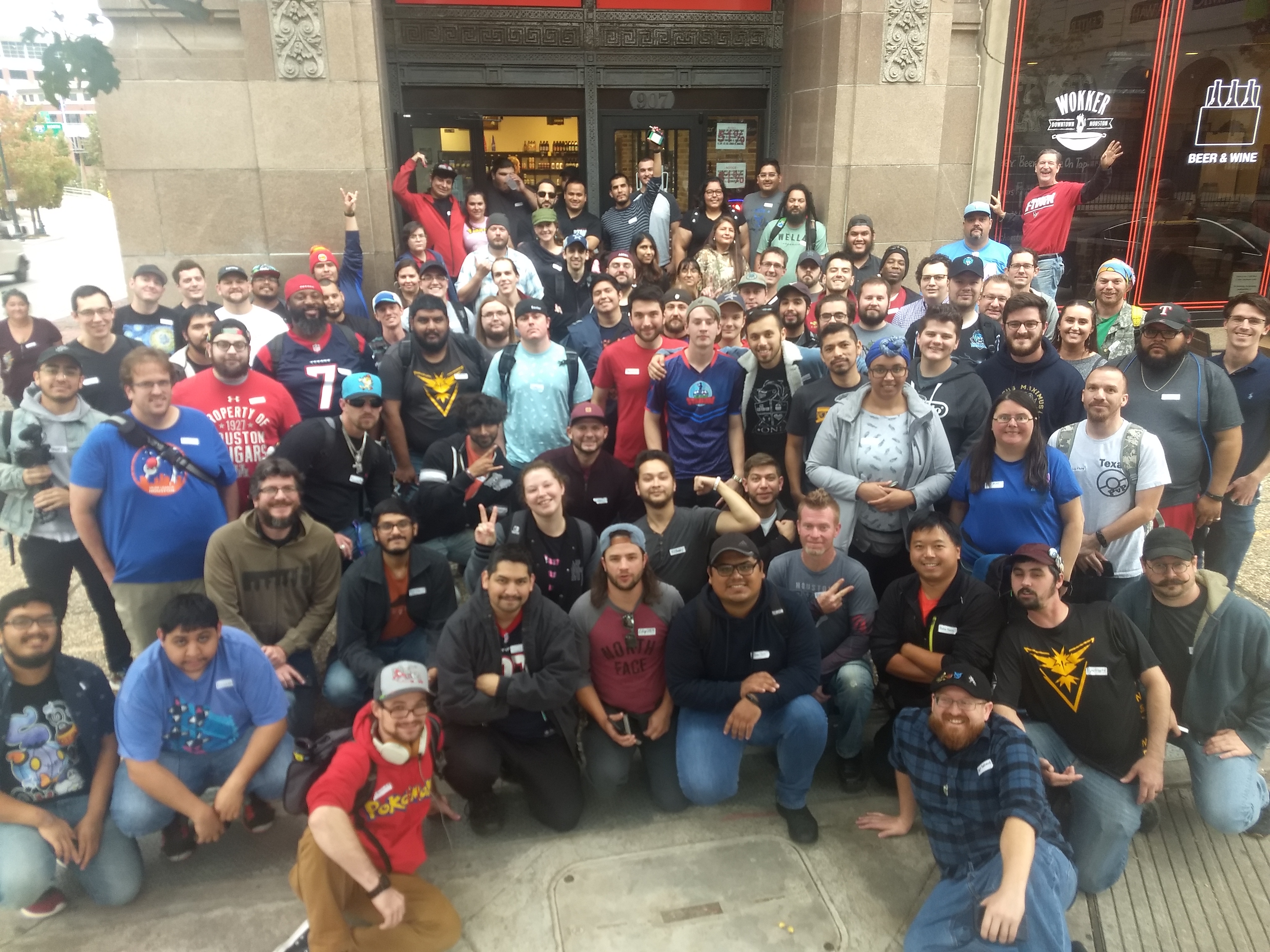 Sideline Reports is a new series where we talk with tournament winners, community organizers, and competitors like you to share stories and learn about what’s going on across the Arena!

Silph League Houston was originally founded by Ottokahn, a now-retired Silph Road Ranger for Texas, and is made up of several smaller communities who host their own individual tournaments. In Season 1, a few areas decided to try hosting a combined cup, which became the “Central Houston” brand of tournaments, with astrojling as the Tournament Organizer. With a mix of core regulars and newcomers, the community works together to ensure that there are lots of options for players, so no one has to miss out on a cup! Their Ferocious Tournament saw 92 dedicated participants, both local and visiting, eager to battle it out to see who would reign victorious. The team at Houston did a remarkable job in running such a smooth and successful tournament, where five players tied for the crown! A fierce tie-breaker was fought, leaving the home-town hero PeaceLoveHugs victorious!

Following the tournament, Arena Reporter HeyItsPugs contacted PeaceLoveHugs to gauge their reaction to the cup and find out how they managed to claim the title of the victor!

H: I wanted to start by asking how you prepared for the meta? What sort of overall thoughts did you have about the meta going into cups?
P: Since my weighted Cups are usually towards the end of the month (with this cup being an exception), I always look to the current winning teams and practice with all of them. I found that this Cup has maybe 3 variations – double Water Gun, double Water with Suicune & double Charm, with minor alterations. I started on the double Water Gun team early, as it could run over double Charmers on the back of shield pressure. I was able to get Suicune to work for me for a little in practice, but my sparring partners and I found it easy to shut down by latching whatever Pokémon is lined up with Suicune no matter what and always never shielding. Double Charmer isn’t my playstyle as I like to have options; Charm while powerful makes the Charmer essentially only have 1 move and another that’ll get blocked at best. I used to play a lot of TCGs and I understand the strategic value of simply having ‘card advantage’ (or in the case of PoGO PvP having ‘options’).

H: Okay, and what were your thoughts going into this particular tournament? Did your team end up diverting from any of your practice cups? Were you on the lookout for any teams or weaknesses in particular?
P: I thought that ‘I have an opportunity to position myself for the number 1 spot in the US later on in the season.’ My regular-season goal is to qualify for Continentals via top 20 invite, to take some pressure off of needing to sweep my Regional to qualify. My team had only minor changes this time around, in Sinister I ran 4 different teams in the first 4 Cups I participated in because I wanted to try them all out. This time I felt the Ferocious meta was ‘solved,’ but I added a wrinkle to the meta 6 that many other players have employed as well, subbing out Nidoqueen for A-Sandslash. I was however concerned about having to navigate A-Sandslash mirrors and K-Raichu, particularly with Thunder Shock and Brick Break – I figured the meta already hated out most of the electrics but Thunder Shock Raichu is one of the few options that can outspeed the team comp I used.

H: That is a very interesting comparison to Sinister! Okay, so when you got going in the first few rounds, what were some of the strategies you employed? Did your fears of A-Sandslash mirrors and K-Raichu materialise?
P: In the first 3 rounds I ran into the same team: Nidoqueen, Vaporeon, Bibarel, Umbreon, A-Ninetales, and Skuntank. Because I had time to prepare for those teams well in advance, I ran a scripted line, leading with Bibarel and immediately switching to Skuntank unless they led Nidoqueen, which I don’t think anyone did, and leave A-Ninetales in reserve. This usually gave Skuntank an energy lead that could give me the advantage to win many not-Nidoqueen matchups but I was fishing for their Nidoqueen. I could trade shields with Nidoqueen thanks to the energy lead and leave it in farming range for Bibarel. Without their Nidoqueen and a massive amount of energy on my Bibarel, my A-Ninetales was in a sweeping position. Credit goes to bellabaolam for that line!

H: Sounds like a pretty solid team and strategy! I see you ended up losing in round 4 – what happened in that round differently to the rounds? What sort of adjustments did you have to make to your core setup?
P: I was fearful of Donphan with Counter, and so I ran team comps which I was less familiar with. This was the first time I had to adjust my team. I never actually ended up seeing the Donphan, but all of the battles came down to either 1 HP or a race to the charge move.

H: What was your mindset towards the final rounds? How did you stay composed? Did you go back to more familiar team comps or did you run different strategies?
P: After round 4 I didn’t think I would win the tournament, but I needed to win out to go 6-1 and leave myself in a good position for overall rankings. I stayed composed by reminding myself the overall goal was to go X-1 or better and that I was still in a position to go 6-1 in the tournament. The remaining teams I faced looked a lot more familiar, so I went back to using various predetermined scripts including the Bibarel/Skuntank/A-Ninetales team when applicable.

H: Well that driving force paid off and you ended up joint-winning the tournament and won the tie-breaker! How did you feel at the end, having come back from the loss to winning overall?
P: I felt relieved afterwards. It is always a challenge to go up against my GO Stadium rival, Arrohh, and to battle him. We are both very familiar with each other’s playstyles, and the fact that we battled in my weighted Cup in what felt like a must-win game for me added additional pressure.

H: And on reflection, how do you think you did? Would you change your team or strategy at all?
P: I felt good about the results, but after re-watching some of my streamed matches there were some lines of play that I need to clean up if I want to continue to improve and compete for the Championship at the end of the season. I would also be interested in trying out Flamethrower on Skuntank to help with the A-Sandslash matchup.

H: Well thank you again for taking the time to speak to me, and congratulations again on the win!
P: Thank you for the opportunity to discuss my weighted Ferocious Cup, I appreciate what you guys are doing to promote PvP.

You can follow PeaceLovePugs on Twitter at @PoGOHugs and check out the Twitch stream of the tournament on HoustonPoGoLive’s channel!