As we discussed in the first article of this series, the most important thing you can do to prepare for a tournament is to build and practice with your team beforehand. You will only battle with three at a time, but you will bring a team of six so that you can use different group compositions to counter their three. There are a few things you will need to consider when selecting the six Pokémon you bring to battle, starting with knowing the meta for the tournament you’re about to participate in!

The Meta is short for “the metagame,” and refers to the game outside and beyond the game. In Pokémon Go, when people talk about The Meta, they are talking about the strongest Pokémon in that specific cup that will shape the way everyone plays; the Pokémon you will not only want to bring, but also be able to defeat with your team. All good teams must be able to both function within, and overcome The Meta. For instance: think of it like Rock, Paper, Scissors where the Rock is Skarmory, the Paper is Lanturn, and the Scissors are Venusaur. Because they are the strongest in that cup, you should expect to see all three, and you should know how to beat them. Check in on The Silph Arena Reddit from time to time to see what experts think about the developing meta, and check out your favorite Pokémon Go content creators on YouTube for videos whenever a new cup is announced. There are a ton of great videos out there!

Hitting your opponent with charge moves is going to be a big part of your path to victory. Now that you can purchase a second move with stardust and candy, you have the ability to make your Pokémon even more versatile and powerful! If you have two options, your opponent might play something that will resist one move and take reduced damage, but perhaps not the second move! There are a few things to keep in mind when picking which charge moves to use: 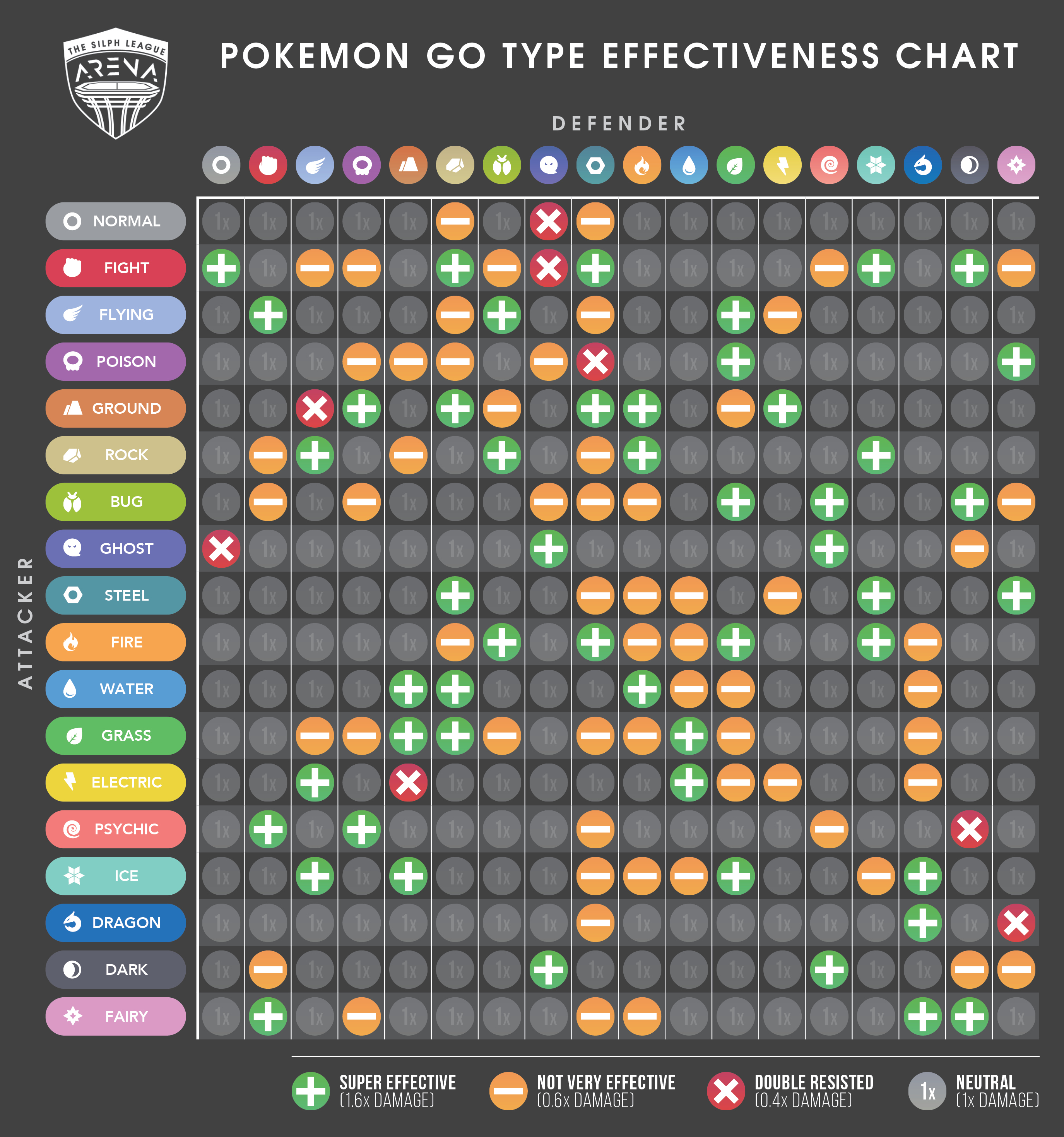 Super Effective Damage and Not Very Effective Damage refer to how much damage your Pokémon will take and dish out based on the type of attack used. A water-type attack will do Super Effective Damage (1.6x) to a ground-type Pokémon and only receive neutral (1x) damage in return. But that same Water Pokémon will deal Not Very Effective (0.6x) damage to a grass-type Pokémon and take Super Effective Damage (1.6x) in return. In common terms, the grass-type will “resist” your attack, while the ground-type is “weak” to your attacks. If a Pokémon has two types, it can have DOUBLE weakness and resistance, so watch out for those counters! It can be a lot to remember, but keep a type chart handy and you’ll do fine. Many of them make sense if you think about them: Fire is weak to water, but strong against ice; electric is strong against water, but weak against ground. One of the benefits to the Silph Road cups early on is that you have to learn far fewer weaknesses and resistances because of the limited typings included!

STAB, or “Same Type Attack Bonus,” is a boost your attacks get when the damage type of the attack matches the type of the Pokémon. If you have a water type Pokémon on your team, and use a water type attack, it will do 1.2x as much damage as a non-water type Pokémon using the same attack. STAB can hep you do extra damage to your opponent, but shouldn’t be your only consideration. Another important factor is type coverage.

Coverage is your Pokémon’s (and team’s) ability to counter-attack what is brought to beat it. Using what we know about resistance and weakness, you can expect your opponent to try to bring something to fight your Pokémon that will deal Super Effective Damage to it. Coverage is having the ability to hit it back! Torterra is a great example: Because of its grass/ground typing, it is weak to bug, fire, ice and flying. Luckily, it has Stone Edge as a possible charge move, which can deal Super Effective Damage to all four of those types! You may be at a disadvantage, but you won’t go down without a fight!

What to look for in a Pokémon

There are a few things to take into consideration when looking at a Pokémon for your team. First, what you want it to do: Do you need a tank to take a lot of hits and survive? A glass cannon to deal a ton of damage before it goes down? A specific role to counter one particular Pokémon you’re worried about? There are many strategies that you can use, but there are four main things you will want to consider:

With these 4 pieces of information, you can evaluate any potential picks as to how good they might do without ever having to power them up and test them. But keep in mind, this is only a guide! Many elite trainers have had success using Pokémon that don’t fit this mold.

As you build your team, you may notice weaknesses that you will want to protect. A great example of this is Toxicroak. In several cups, Toxicroak has been a very powerful Pokémon because of its unique typing and great moveset. It can absolutely dominate a lot of opponents, but has a dangerous double weakness to Psychic attacks. This doesn’t necessarily mean you shouldn’t use it, but it does mean you should bring teammates to protect it. You can expect opponents to bring a Confusion user to beat your Toxicroak, so you can protect it by bringing Pokémon that beat Psychic types handily. It doesn’t mean you’ll never get stuck in a bad matchup, but it does help you to be as big of a threat to your opponent as they are to you and your friend Toxicroak!

And just like everything else in PVP, now that you’ve built your team, get to battling! Getting comfortable using your Pokémon and understanding how they work together is an important step in getting the most out of your well-rounded team.