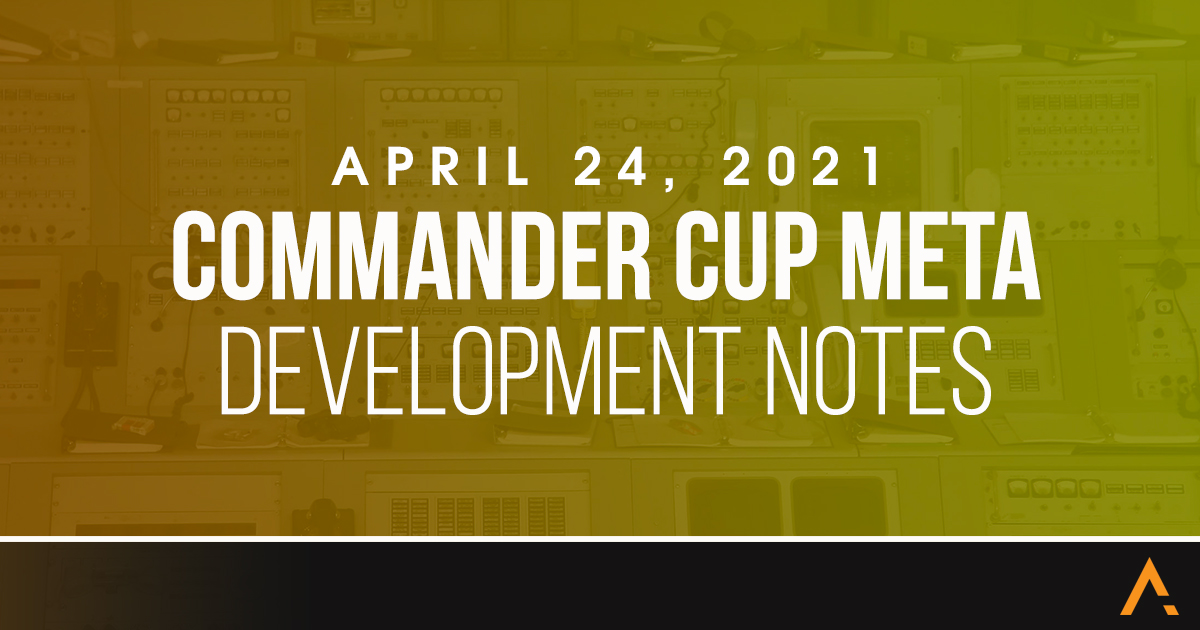 During the second half of Season 3, the Meta Team has been pushing competitors to meet a wide variety of team-building challenges. We wanted to continue these challenges in May’s themed Cup while also creating a meta with a more traditional Arena Cup feel.

Commander Cup originated from an idea we explored during the Season 2 Continental Championships – what if competitors picked a signature Pokémon and built a team around it? This idea introduced a wide range of complexity. What rules influence how you pick one Pokémon over another? Does each Pokémon have associated types, generations, or allowed lists? Ultimately, we decided on a very simple ruleset: pick one special Pokémon from a list, and build the rest of your team from a traditional typed meta. These intuitive rules allow competitors to focus more on practicing their strategies and made it easier for us to iterate, playtest, and balance.

While we had a cursory idea of which Pokémon would make fun Commanders, we decided to develope the typed meta first. Our goal with the typed meta was to provide a more restricted field than previous Cup. We also wanted the typed meta to be able to stand on its own. This way, the typed meta would be easy to understand and cover, and competitors would have more flexibility with their Commander.

The types we chose – Psychic, Poison, Ice, Rock, and Electric – are unique together but should feel familiar to fan-favorites like the Twilight and Sorcerous Cups.

We eliminated Steel from the typed meta since it resists four of our five chosen types. This gave us the opportunity to introduce select Steel types in the Commander slot that wouldn’t overwhelm the meta at large. We also targeted Pokémon like Abomasnow, Galvantula, Medicham, and Stunfisk who tend to overshadow others of their type. With Steel and Fire types are limited, we felt that Shadow-boosted Charm and Razor Leaf would shift the meta in undesirable ways. To steer the meta away from Fast Move oriented strategies, we banned Shadow Pokémon as well. Drapion was banned for similar reasons – as the most viable Bite user, we didn’t want its heavy Fast Move damage to trivialize the Commander roster or the typed meta.

With the typed meta defined, we identified the key Pokemon and interactions that would likely take shape. Toxicroak, Hypno, Alolan Muk, and Alolan Ninetales formed the mold of our early meta-analysis and helped us tackle the next stage of meta development—the Commanders.

The first iteration of the Commander list contained almost two dozen Pokemon. We refined this to a list of ten to keep the meta more focused. (We won’t mention too many that didn’t make the cut to avoid potential heartbreak!) We wanted each Commander option to feel intentional and viable with specifically designed interactions.

To assess the potential Commanders, we moved on to team-building exercises and playtests. This involved analyzing potential team cores for each Commander, the strength of those team cores, and their corresponding core breakers. We made some adjustments at this stage to address some less appealing Commander options, such as Chesnaught, whose spot eventually became Poliwrath. While Noctowl didn’t stand out initially, we liked it for its anti-meta potential against some of the top Commander choices.

Here’s a quick roundup of the Commander list and the thought process behind each pick:

The Commander Cup is a mix of new and traditional ideas. Let us know if you like the format! It has a lot of opportunities for iteration between the typed meta portion and the Commander roster. We hope you enjoy it and bond with your Commander on your way to victory!