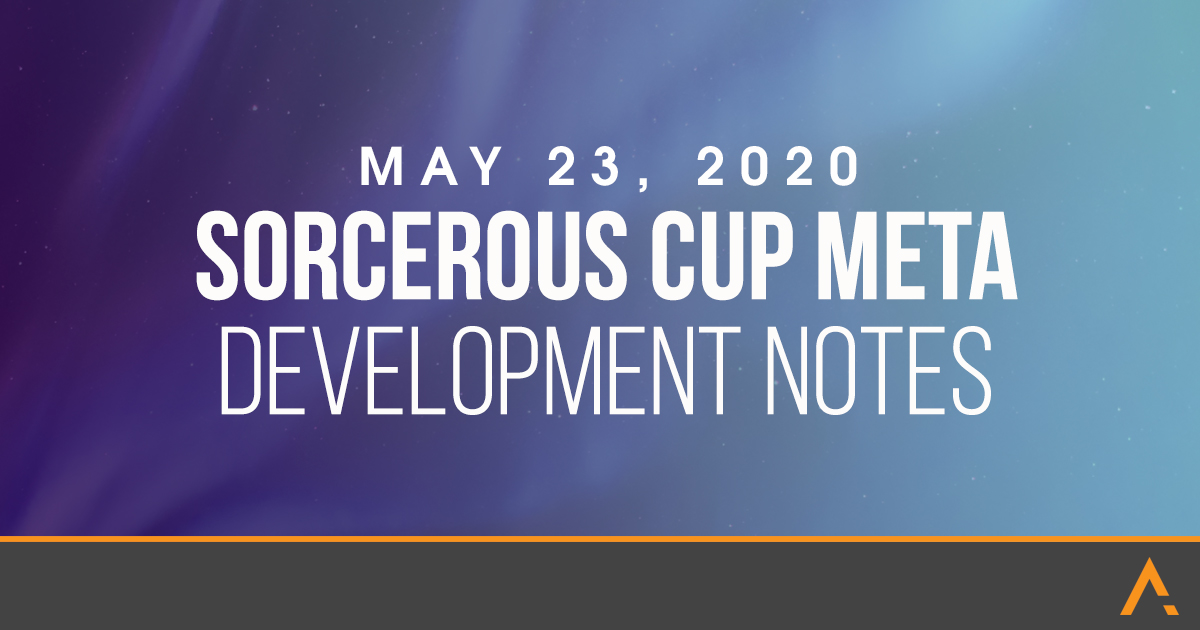 The Silph Arena meta team here! This month, we wanted to shed some light on the Sorcerous Cup Meta, our design goals, and how we arrived at the ruleset you’ll be using to compete in the coming weeks. Here’s a quick peek behind the curtain:

The Forest Cup featured glassy Pokémon and tough type relationships. With that, there was a clear benefit to correctly predicting your opponent’s lead, as well as a lot of fast-paced gameplay pressure to make smart shield decisions earlier than some are accustomed. We wanted to avoid a similar playstyle, so we went back to the drawing board for June.

Early in the conversation, we defined some key questions and metrics to consider:

Coming off of Forest Cup’s fast-paced fights, we hoped to feature more bulky neutral matchups. It’s a slower style of play that puts less stress on your lead and opens up ways to work out of bad situations. Season 1’s Twilight Cup served as an inspiration for the dynamics we were looking for.

We started by exploring which Pokemon have been featured the least in the current Season’s metas so far to see how we could freshen things up. Rock types (like Regirock, Solrock, Lunatone, Carracosta, etc) turned up frequently, so one of the early ideas involved them in a 5-type cup that included Poison and Fairy. Working more on that, we realized a Charm-Fighting-Steel hard counter dynamic seemed likely to crop up. That dynamic featured prominently in February’s Rose Cup and we wanted to steer away from it. Another early idea included Dark and Ice types, but the Pokemon we expected to become meta proved too expensive or inaccessible, such as Zweilous and Regice.

Another early work was a spiritual successor to Twilight which included Pokemon that could learn Dark, Fairy, Poison, and Ghost-type attacks. This definition of a meta by movepools expands the field quite a bit, which is good for variety, but is sometimes too expansive to balance. We looked to ban some Pokemon (like Altaria and Ferrothorn) to keep the new meta in the spirit of the original, but that proved too challenging; our rules introduced “mudbois” like Swampert and Quagsire, and newer Dark types like Zweilous and Scrafty. These heavily incentivized Razor Leaf and Charm hard counters which seemed unavoidable without an unwieldy ban list.

Eventually, after careful consideration and a lengthy discussion, we brought our early ideas into balance to form the types you currently know: Ice, Poison, Fairy, Psychic, and Normal. This interestingly enough, takes some of the best parts of each early idea, and combines them into a single meta that fits our design specifications better than any individual idea did on its own.

Ironing Out the Ruleset & Bans

In the first version of this draft, we noticed Mawile and Bite Drapion had strong matchups and their Fast Move-heavy play didn’t fit our design goals. We decided on a rule for 2nd Charged Move costs 50k Stardust and below like January’s Fusion Cup. This became a concise way to remove Mawile and Drapion while limiting potential Stardust cost.

Next, we also decided to ban Dewgong and Shadow Pokemon for cost reasons. We didn’t want players to feel obligated to spend Elite TM’s to compete, and Shadow Pokemon have very low accessibility with the current global situation and no recent Team Rocket events.

This opened things up as we explored candidate Pokemon and how we expected the meta to develop. While we checked possible cores and core breakers, one Pokemon repeatedly caused trouble—Alolan Raichu. Alolan Raichu with its upgraded Wild Charge smashed the bulky picks we wanted to build our meta around, like Azumarill, Noctowl, and Hypno. Its counters also performed poorly against the rest of the meta. Resorting to Grass types and the Ground-type Piloswine to hard counter it wasn’t a direction we wanted the meta to go (not to mention Alolan Raichu has coverage moves to hit them), so we ultimately banned it.

The Azumarill ban button is an easy one to want to reach for. However, it fulfills an important role in the meta we were looking to create. It single handedly breaks up Charm-Fighter-Steel trios and provides a bulky pivot for bad situations. We hope its inclusion and Alolan Raichu’s exclusion keep the meta dynamic closer to the interplay of Twilight rather than strict hard counter relationships like were found in Season 1’s Nightmare Cup or the Rose Cup.

So, now that this meta is created, what does it look like? This is a challenging question that will be answered much more fully with a number of contributors and content creators alike investigating this meta for themselves, as well as players jumping in to play with it and construct their teams. Nonetheless, there are a few things we can examine to get started. 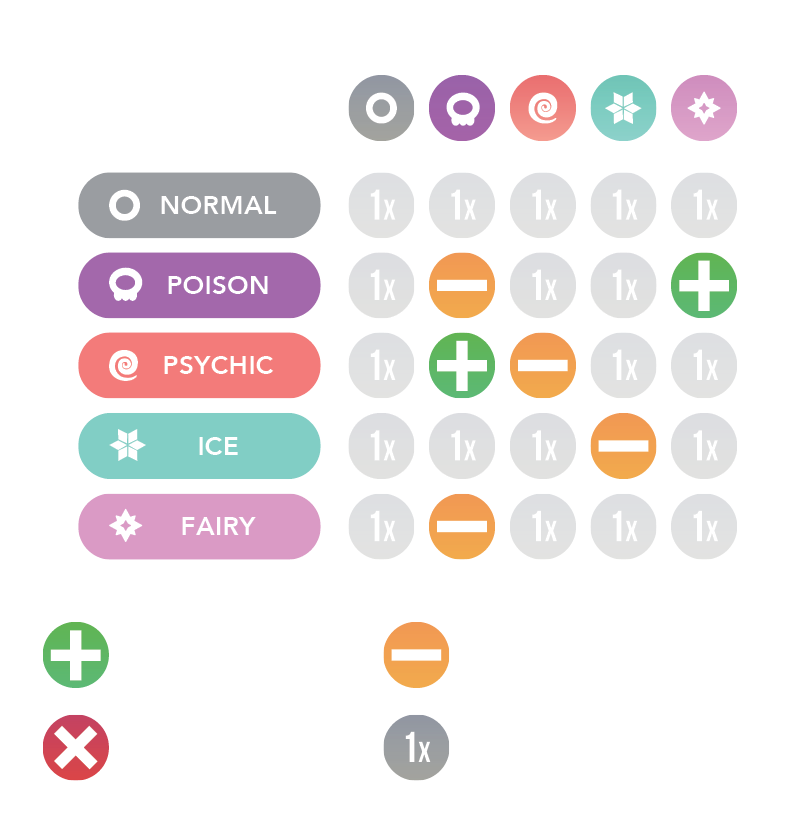 One of the things we were looking for in this particular meta is neutral matchups, where type advantage doesn’t immediately decide who wins a matchup, and more emphasis is placed on the in-battle decisions. If we truncate the Silph type matchup diagram to include only the types in this cup, you can see that a great deal of these matchups are in fact neutral. This of course doesn’t represent the full extent of the meta’s type matchups, because the attacks can be any type within the attacker’s movepool, and the defending type can be a dual-type containing one (or two) of the cup’s types. But nonetheless, the core of the meta is based around neutral type matchups.

Another thing we can look at is how the individual Pokemon’s matchups play against one another. Now this itself is a bit of a loaded question because in a Silph battle, individual Pokemon do not fight each other “in a vacuum.” There’s a number of contributing factors that can play into a battle, such as player decisions within that individual battle, shielding situations, and energy and health advantages. In order to account for all of these factors when examining whether Pokemon A beats Pokemon B within this meta, what we did was construct two teams each composed of 3 of the same individual Pokemon, and had them battle each other, making decisions randomly until the battle’s termination. And then we did that 1,000 times for each matchup. Then, for the metric of whether Pokemon A beats Pokemon B and by how much, including all of the variable factors mentioned above, we take the mean of the scores of these 1,000 battles. Next, we repeat this process for every individual matchup in the “short meta,” which we chose fairly arbitrarily to be the top 42 PvPoke-ranked mons. Finally, we can do a clustering analysis on this to see which Pokemon behave like other Pokemon within this meta.

We can use what’s referred to as the “silhouette coefficient” to determine how many groups make sense for this kind of clustering analysis (as shown in the plot below). We found that around 8 groups was the right number. This itself is an important metric for measuring a meta. This means that there are roughly eight “roles” for Pokemon within the meta. Now, this can sometimes be a bit concerning. After all, you can only have six Pokemon on your team, so filling eight roles is virtually impossible. However, having more roles is a good thing for the variability within a meta if many (or ideally all) of these roles are not strictly “necessary” for your team.

In order to determine the “necessity” of roles within a meta, we need to see how the roles interact with one another (which is also very useful for constructing a team). In order to do these, we used the clustering algorithm to actually determine which mons belonged in each of the eight groups. Using that information, we can construct a directed graph (which is really just these groups with arrows between them) to show which groups’ Pokemon beat Pokemon from which other groups. This is a little too much information, because every pair of groups now has an arrow between them, so we removed the arrows for groups that didn’t beat the other groups an arbitrarily large percent of the time. We found that not every group is a necessary role within the meta, and there are even some “wildcard” groups that don’t strongly beat or get beat by any of the groups.

After studying the numbers, we wanted to make sure the cup felt good, too. What was it like to build a team of 6 and pick against another team of 6? Was our bulky matchup goal intact? Would matches resemble a game of Frogger between Toxicroak and Confusion users? And how practical would it be to overcome bad leads?

We started by plugging the format and our expected team structure into PvPoke training battles. This was a fast way to get a feel for the format and all the potential picks. The bot’s analytical approach was also useful in seeing which lines or cores could be prevalent.

Putting the format to the test, the gameplay lined up well with our design goals. The bulky Pokemon we intended to be core to the meta worked well in practice. We found that matchups between switches and counter-switches often extended beyond the switch timer, so there was plenty of opportunity to outplay with smart switches and energy management.

One hard counter dynamic that came up in playtesting is the Confusion-Poison-Dark trio. This is most notable on teams that are weak to Confusion (perhaps intentionally) with Dark types like Alolan Muk and Alolan Raticate as bodyguards. Picks like Skuntank and Froslass can potentially win against all members of these trios and there are many picks outside of the trio that can take on 2 out of 3, so this dynamic is avoidable with the right cast. Ultimately the meta is player-driven, and it’ll be interesting to see which dynamics players narrow in on.

One topic that came up late in playtesting was the recent overtapping bug which makes longer moves like Confusion frustrating to play with. At the time this bug came out, the meta was by and large finalized; we decided overhauling the meta to reduce encounters with overtapping was too big of a change in our timetable to give an updated meta its due diligence. If it persists, overtapping will be a consideration for future metas.

We hope you enjoyed this little peek behind the curtain, so to speak, into the meta creation process and that you enjoy this new month’s meta! We think it’s got a little something for everyone, is quite different from a lot of the metas we’ve seen this season, and there’s a lot of different directions this one could go. Ultimately, the real meta is determined by you, the players, and we can’t wait to see what you make of it.