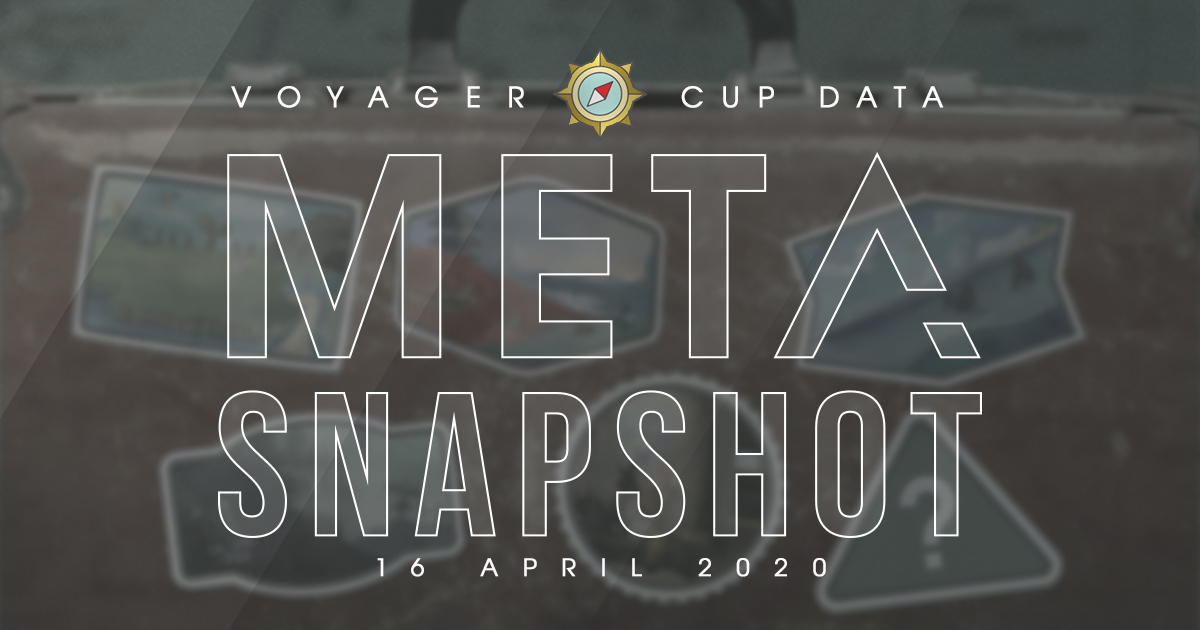 “Meta Snapshot” is the brainchild of Krydos, a statistics addict from Santiago, Chile. He also leads the Arena’s Meta Team and can usually be spotted on Discord using far too many panda emojis.

We’ve reached mid-April and the Voyager Cup is approaching its peak this weekend, with Regionals held in over 50 cities across the globe! With so many tournaments on the horizon, we think is a great time to share some interesting facts about the Voyager Cup: which teams are the most popular, and how the picks are distributed amongst the slots.

Our main takeaways from this analysis are:

Each generation has a couple of all-star Pokémon in Great League, and each one of those fill a crucial role in Voyager Cup. We will talk about each slot separately, starting with:

In general terms, Venusaur is slightly more popular than Hypno, however the later is much more popular among the Ace and Challenger players, first because it can beat Venusaur, but also can provide you some great coverage with Ice, Thunder, or Fire Punch in conjunction with Shadow Ball which is, most of the time, unresisted. In third place we have Wigglytuff, which is present in almost 11% of the teams, but can’t win against Venusaur and has a close matchup against Hypno. Additionally, as a fairy type it takes the spot most commonly occupied by Azumarill, which is a popular choice in Voyager.

This is very one sided in favor of Azumarill, which should come as no surprise to anyone familiar with its tankiness, great moveset and broad coverage. Skarmory and Umbreon are less present in this meta, but we have seen a few teams running one of those with great victories over the standard meta. 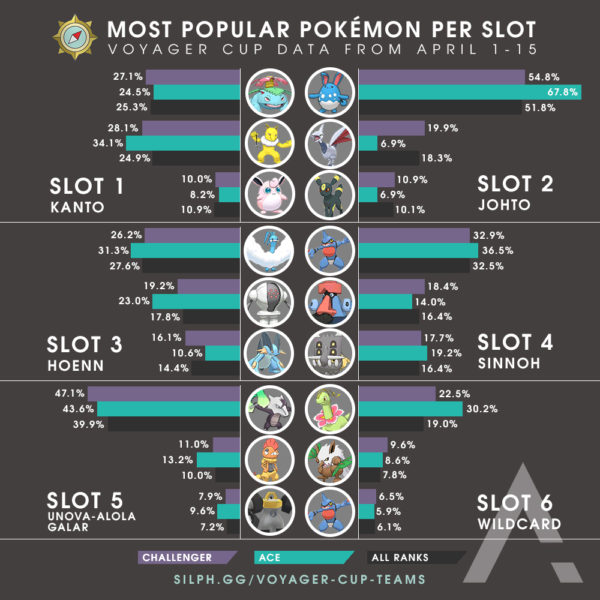 Hoenn has multiple awesome picks for Voyager: Altaria, Registeel, Swampert, Whiscash and Medicham, each one has great, unique coverage. However, Registeel has the lead in terms of popularity amongst all the tiers – its been a fan favorite in GO Battle League – followed in the number 2 position by Altaria, which is also one the strongest picks available for Great League. The mudbois, lead by Swampert are less popular in general, because of a potential double weakness to grass if you are already running Azumarill in slot 2.

Toxicroak is by far the most popular fighting type pick in the Voyager Cup, and why wouldn’t it be? Counter is excellent in this meta, but its formidable coverage with Mud and Sludge Bomb really puts it over the top. Next, we have a tie in second place, between Probopass and Bastiodon, two picks which share the same tanky role with different coverage (although Bastiodon is a bit less versatile).

Surprisingly (or not), Alolan Marowak sits at first place due to its great moveset – not only good against grass and Steel types, but also against ghosts and psychics. For those who don’t run Toxicroak, another viable option is Scrafty, who is also not weak to psychic-types and can beat down all the tanks in Voyager. Melmetal is third place is another viable option, with the ability to pull out wins against other tanks thanks to Superpower, while dominating Altaria and many others with Rock Slide.

This slot is one of the most diverse in the Voyager Cup – even if Meganium is in 1 out of 5 teams in the meta – the rest of the picks are very close to one another, to name a few: Shiftry, Toxicroak, Stunfisk, Cherrim (Sunny Form), Jumpluff, Noctowl and Sableye. 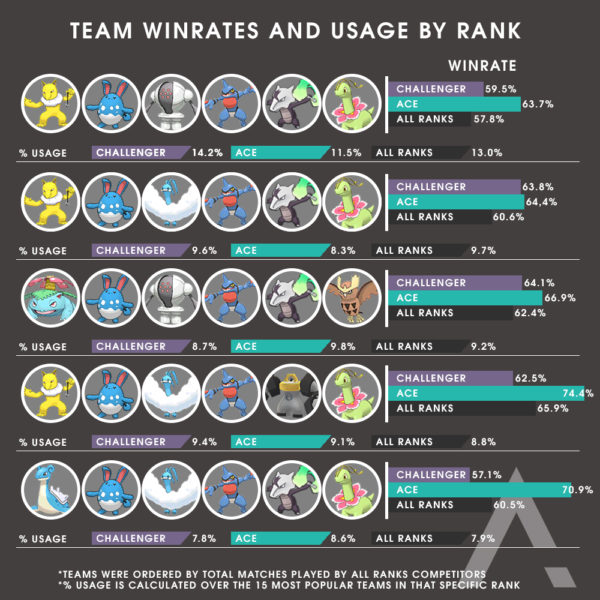 Over 6000 different teams have been made during the first weeks of Voyager, but only 15 of them have 100 or more appearances, representing 0.02% of the total teams, accounting for 15% of all the teams used.

Of the top 5 most popular teams used in Voyager, all of them feature Azumarill and Toxicroak, both being extremely good against the rest of the meta and also very popular in all ranks as we saw in the last section. Now, despite many previous analysis, Hypno has become a strong pick in Voyager, due to its great coverage as we highlighted before, but also, because its Confusion is almost necessary to discourage the use and abuse of Toxicroak. Meganium as the main grass pick is also a consequence of Venusaur, Ivysaur and Tropius being restricted, but also because it adds tankiness and solid damage to these comps.

Our most popular composition is Hypno, Azumarill, Registeel, Toxicroak, Alolan Marowak, and Meganium, a solid team that matches very well against all the other meta comps, and, as you can see, has a great winrate in all ranks. (Winrates have been calculated as the total rounds won over the total rounds played).

Anyway, amongst the 15 most popular compositions, the one with the highest winrate is the team composed by Hypno, Azumarill, Altaria, Toxicroak, Melmetal, and Meganium. This comp was popularized during the first week, especially in Latin America after Swaggron333 swept a seven rounder and then published a video explaining the basics of his team.

Yes, the meta is very centralized in a few picks, but there is clearly room for off-meta compositions that do very well against these core picks. We have seen many Regionals where the best players are fighting fiercely for a spot at Continentals, and yes, they are bringing spicy picks with great results!

This is the first time the Meta Team is publishing a Meta Snapshot based on a Silph Arena Cup. While we have a lot to learn and discover about player choices, we are delighted by the enormous diversity, even if it may not be evident at first glance, present in the Voyager Cup. We just highlighted the main findings and centered around the core of the meta, the most reliable compositions and how popular some Pokémon have been the first weeks of Voyager.

Next week we will be back with a deeper analysis into the mold-breakers, but also on how this meta evolves during the next batch of regionals and big cups to be held this coming weekend. Don’t miss any action, check what other players around the world are bringing to their tournaments, study, practice, and conquer your region!

– Head of the Meta Team Krydos –