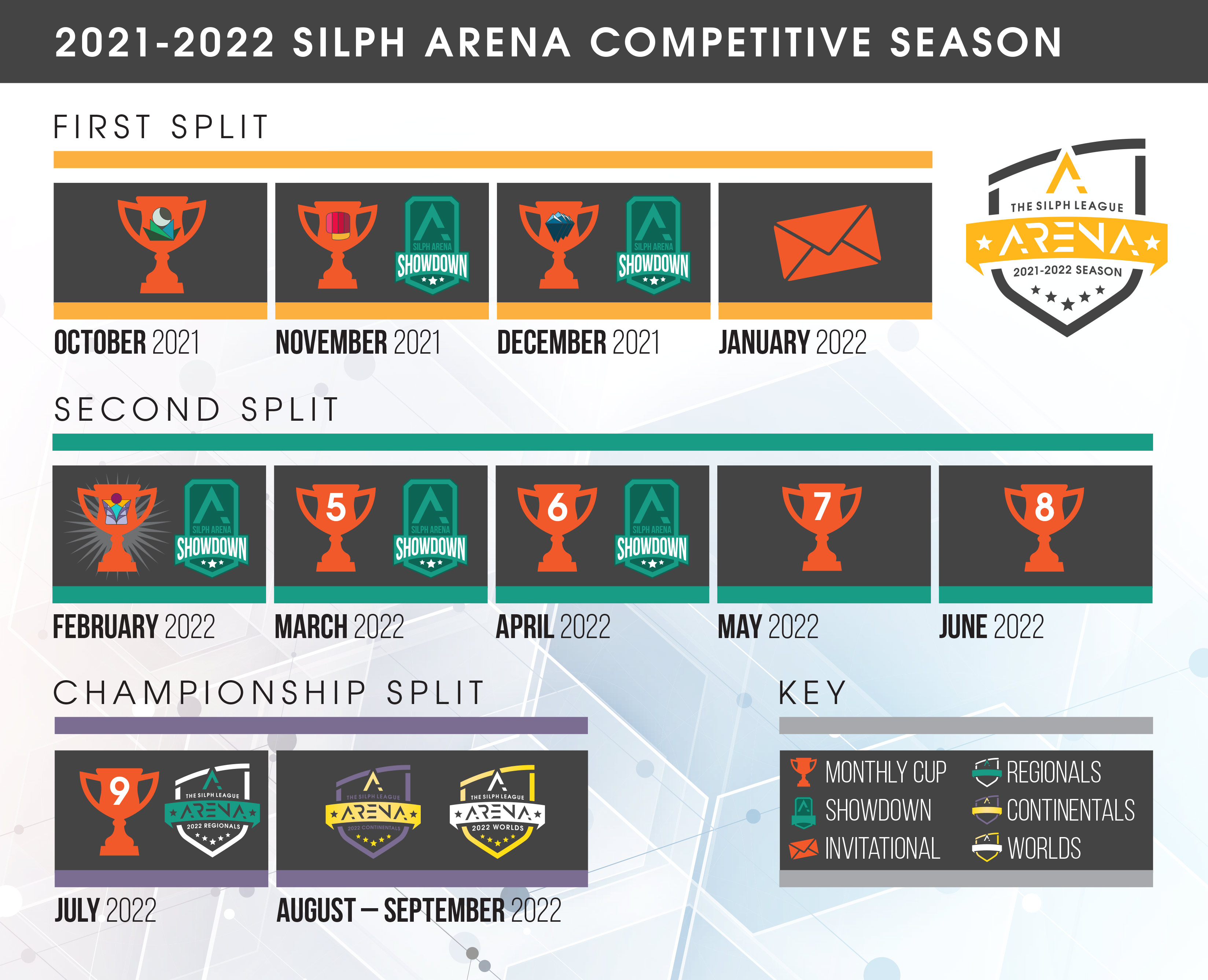 Overview: A new season of Challenges

Get ready for a PvP Season full of new challenges! From October 1st, 2021 through September 30th, 2022, the Silph Arena will test tens of thousands of competitors around the world in the ultimate competitive challenge. Come prove your skills and show your region, nation, and the world that you're the very best in the premier competitive Pokemon GOTM PvP league.

Three monthly themed Cups will challenge competitors during the first split of the Season. Cups are designed with unique restrictions (types, limited bans, Generation restriction, etc.) to test your knowledge of Pokémon, strategic creativity, and battling abilities. Each Cup's details will be announced roughly ten days in advance to provide competitors ample time to prepare their teams.

Instead of a themed Cup, January will feature a special invitational separate from the PvP Season. Competitors will have the chance to display their skills while getting a break from the competitive grind. Stay tuned for more information!

The PvP Season resumes in February, and will continue with new Cup metas through July. Don't get complacent, the metas in this half of the season will be more complex and creative - they will push your team building and battling skills to their limits! New Cup details will continue to be announced roughly ten days before the start of the month to provide competitors ample time to prepare their teams.

Regional Champions and a few of the highest globally ranked competitors will be invited to battle at the Continental Championships held throughout August and September. The competitors who conquer these elite competitions will be some of the most skilled, elite battlers in the world!

Win/loss ratio, strength of opponents, and many other factors will play a role in determining rank. To a limited degree, this can include performing well in Arena-accredited, non-Cup, ranked open league tournaments - but simply playing more tournaments is not necessary to rank well locally or globally. Cup play is weighted significantly - and performing well in monthly Cups should be the primary focus of those seeking to qualify for a Regional invitation.

The midseason break in January will feature a brand new invitational challenge! Invitations to this event will be determined by multiple factors, including Global Rank. More information about this exciting invitational and how you can qualify will come after the season starts!

There will be multiple paths to earning an invitation to Regionals in Season 3. Stay tuned for specific qualifications, information will come later in the season!

The path to Continental and World Championships will be tough, and few will reach the end, but the way to the top is not limited to a single path. Regional Champions, top ranked trainers, and others will have the opportunity to compete at the prestigious Continental and World Championships at the end of Season 3. Specific qualifications will be announced later in the season, so be prepared!

For information about player rank in the Arena, read the Guide to Player Rank!

Monthly Arena Cups and other accredited non-Cup tournaments can be hosted by Silph League community leaders.