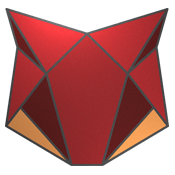 Each month the Silph Arena holds a month-long Cup - a 'themed' PvP tournament - that provides tens of thousands of trainers around the world a specially designed competitive challenge and a chance to prove they're the very best. The Silph Arena is the world's largest global network for ranked Pokémon GOTM tournament play.

During the Cup (November 1st - 30th), local Silph League communities host and record a special tournament using the free Silph.gg tools. Wins and losses in this local tournament affect your player rank on local and global leaderboards - and may eventually even earn you an invitation to compete at Regionals and even the Continental or World Championships held at the end of the season!

All players are welcome to compete, whether it’s your first tournament or your hundredth! Find a local tournament near you on the Tournament Map!

The Ferocious Cup has a few special rules (designed to provide added challenge and fun) that differ from standard PvP combat in Pokémon GO:

Competitors will bring a team of 6 Pokémon (and register them before the tournament begins). All battle parties used must be comprised of these 6 Pokémon.

Matches are played in Great League: only Pokémon up to 1500 CP are permitted in the Cup.

Rather than being restricted to specific Pokémon Types, the Ferocious Cup is limited to a selection of land-based "beast" Pokémon inspired by the fearsome beasts that rule the land. The species whitelist features a selection of 130 land mammals and reptiles that have been analyzed and selected for their ability to create a new challenging meta. Review the list below to see what is permitted.

What follows is the official list of exactly which species are permitted for use in the Ferocious Cup:

Only one of each Pokémon species is permitted on your team of 6. (No species duplicates!) However, Pokémon forms with different typings are permitted on the same team.

Arena Rules will be followed in all other particulars.

Take a moment to review the Arena Rules linked above. The rules have been updated for the new Competitive PvP Season, make sure you’re familiar with all the changes!

We will have prizes for this tournament. Official Silph Arena Merch!
Looking forward to seeing everyone there!