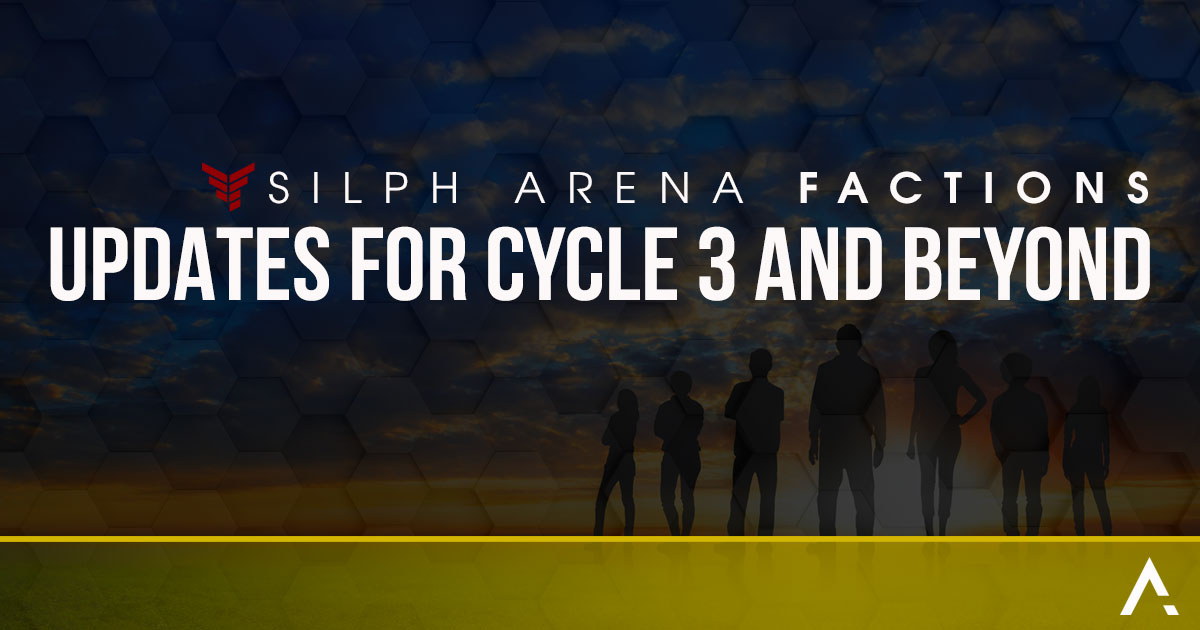 The field metas for Cycle 3 will be:

Last cycle’s changes to Master and Ultra are still in place, no changes to the Ultra League restricted list. No changes to Great League. In preparation for the re-ordering necessary for the coming season, Open and Qualifier tiers will be combined for cycle 3 into one large group. (More on this later)

Cycle registration will open Monday, January 10th. As always, DO NOT RSVP UNTIL YOUR FACTION IS COMPLETE. When you RSVP, the cycle takes a snapshot of your Faction just as it is. If there are members you haven’t added, or that you have sent invitations to but they have not yet accepted, they will not appear as available members on your roster when the cycle begins. So set your players, then RSVP. Registration will close Sunday, January 16th at 23:59 UTC. Any Factions not registered by this time will be ineligible for play and must wait until Season 2 to join.

The close of the season will have 3 components: The top 3 Factions in Diamond in all 4 conferences will earn the badges [NA/LATAM/APAC/EMEA] Factions Conqueror, Guardian, and Defender, respectively. No additional battles required, you finish at the top, you win. But we wouldn’t want to conclude the season without seeing the best of the best battle one another, would we? At the conclusion of the season, the top 4 Factions from each conference will be invited to compete in a single-elimination cycle to crown the first ever Factions Global Champion. The top 4 will be determined by first selecting the first place finisher from each of the 3 cycles this season. The last spot (or more, if a Faction placed first more than once) will go to the Faction with the highest total points scored in Diamond over the course of the season. Any Faction that ends the season below Diamond is not eligible for the Championship.

The bracket will be seeded middle-out (1 v 16, 2 v 15, etc), and Factions will be seeded based on total points scored, irrespective of Conference. Qualifying Factions may sub players prior to entry, but all rostered competitors must have played on the Faction at some point this season. No new additions.

Meanwhile, all other Factions will be invited to join a swiss cycle based on the highest tier achieved all season. For example, if your Faction reached Platinum in Cycle 2, but fell back down to Gold, you will be invited to play in the Platinum Melee with ALL other Platinum-qualified Factions from across the globe. You will not be permitted to elect to compete at a level lower than your highest achieved tier. There will be one Melee for each tier, and one winner for each Melee. Qualifying Factions may sub players prior to entry, but all rostered competitors must have played on the Faction at some point this season. No new additions.

As we start the final Cycle of the first season if Factions, we have some changes in store for the second season that we would like to share with you all. Here is a complete list of the Season 2 Factions Updates:

3 additional tiers have been added: Emerald, the new highest tier, as well as Copper and Iron, at the bottom between Bronze and Open. These additional tiers will allow more Factions to face off with opponents at their skill level without the irregularities that come with the large pool of Open Tier competitors. Keep in mind that these tiers are dependent on Conference population – there will always be an Open tier with enough Factions to complete the Cycle, any tiers not filled will be omitted.

With how hard everyone has worked to achieve their current rank, and with the addition of double jumps (more on this later) to aid new Factions, we will not be wiping season-to-season progress. All Factions will retain their position from the previous season, keeping in mind that all the new tiered spots means many Factions will be automatically advanced beyond where they finish in the first season. It is still the case, however, that any Faction that withdraws mid-cycle, or skips a cycle, will start back at the bottom. You are not permitted to jump back in where you left off if you take time off.

While we initially thought these battles would be an exciting turning point in each cycle’s promotions, in practice they ended up being more down-time for the majority of competitors. Removing the week of battles that most don’t participate in will allow the schedule to move along more quickly. This also means there will be no relegation bouts at the end of Season 1, Cycle 3.

With the removal of the relegation battles, adding an additional 2 Factions per tier opens up tier play to a much larger number of Factions, while only extending the cycle by a single week. We think a broader range of opponents will help to eliminate some of the rare stalemates that have been seen in a few groupings.

To help spread the load of the slightly longer cycle around, we’ve added another alternate slot. Seven is still the minimum required to participate, but now Factions may roster up to 10 members. One of these slots may be allocated to a Faction coach, who may also play if the team so desires. We hope this flexibility will help your Factions thrive the way you want them to. Use your spots wisely!

To help address the difficulty in climbing with the added tiers, we are adding double tier jumps into the mix. Factions finishing first in Silver Tier and below will advance not one tier, but two. Factions finishing 10th will drop two tiers. The top 3 tiers will be exempt from double jumps, once you make it that far, you may only advance one tier at a time. See the graphic below for more details if you’re unclear on how this is going to work.

With the addition of all the new tiered slots, we are streamlining the sub-tier battles to a single group. Open Tier will be the only non-tiered group, where all new Factions will join to start their climb. (Note that this change will take effect starting cycle 3 of season 1, before the rest of these changes).

Four Factions will advance from Open to the lowest tier, increased from three. None of Open tier’s promotions are double jumps.

We hope these changes will improve everyone’s experience, it’s been a fantastic first season so far, and we look forward to seeing what you can do going forward!