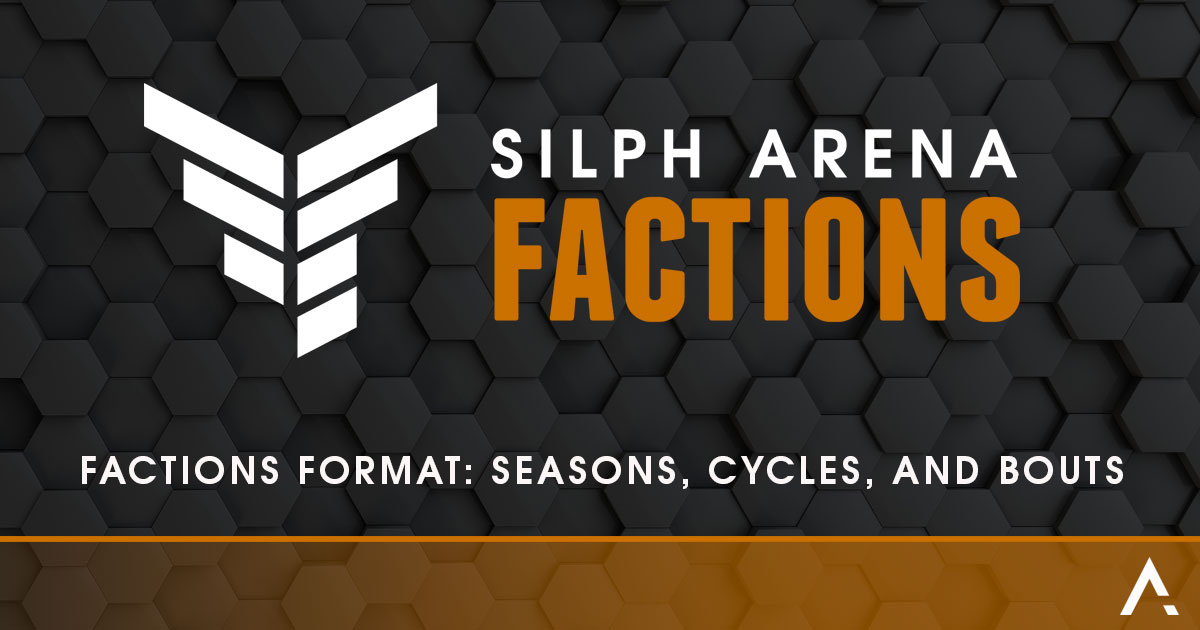 We’re back with the second installment of Silph Arena Factions news! Today, we’ll be breaking down the Factions season layout, defining Tiers, and walking you through a standard weekly bout. Let’s dive right in!

Breaking down a Season

Each Factions Season will be organized so it can be broken down into smaller, manageable chunks so metas can rotate and teams can switch up their strategies. Here’s how the Season breaks down:

Each Season will consist of a certain number of Cycles. The length of each Cycle will be varying based on the number of participating teams, but each one will be a set number of weeks long. New teams will be allowed to join Factions at the start of each Cycle, even in the middle of a Season, and teams can choose to not participate in a Cycle midseason – though doing so could cause you to drop tiers (more on that later).

Competitor positions will be locked for an entire Cycle. If you want to change positions – from Master League Specialist to Field Specialist, for example – you’ll need to wait until the current Cycle ends. In addition, the Battlefield metas will only rotate between Cycles.

Cycles will be further broken down into bouts. The number of bouts played each Cycle could change depending on the number of teams participating and what tier you are in. A bout, most simply put, is the full collection of matches that your team plays against another.

Each bout will consist of seven 3-battle matches (1 per team member). Winning a single battle earns your team 1 point, for a total of 21 possible points per bout. The team with the most points wins!

To start, teams will play 1 bout every week. Your team will be matched against an opponent from within your region, and you will have the full week to complete your matches. Here’s how the week will break down:

All registration and battle deadlines will be set at 23:59 UTC. However, countdowns will show in your local time on your Factions team page.

In addition to organizing the world into regions, teams within each region will be split into various tiers. The tiers will make sure that teams are facing opponents of similar skill level, and provide a balanced playing field for all competitors. Each tier will have 8 teams, though the number of tiers in each region may vary, depending on how many teams are participating each Cycle.

All new teams will start out in the Qualifying tier. There is no limit on the number of teams that can be in the Qualifying Tier. Teams in this tier will be matched each week using a Swiss style bracket that spans the full Cycle. At the end of each Cycle, the top 2 performing teams will be promoted to the next tier.

Upper tiers (Bronze, Silver, Gold etc.) will each be limited to 8 teams. Teams will be matched throughout the Cycle using a Round Robin system. At the end of each Cycle, the top 2 performing teams in each tier will be promoted up one tier, while the bottom 2 teams will be relegated down.

The only exception will be promotion from the Silver tier to Gold (the highest) tier. At the end of a Cycle, only the single top performing Silver team will have the opportunity to be promoted to Gold. They will need to face the last place team in Gold tier in a promotional bout. They’re promoted if they win, but if they remain in Silver for another Cycle if they lose.

We’ll be kicking off Factions with a 2-Cycle long open Preseason this spring. All teams within a region will start on the same level. The first Cycle will be 5 weeks long and run using a Swiss-style pairing system. Teams will then be split into preliminary tiers based on their performance for Cycle 2.

If you miss the initial Cycle or Preseason, don’t worry! Teams can still join between Cycles, or at the start of the first official Season in the Qualifying tier.

Interested in joining the Silph Arena Factions league? Catch up on all of the relevant info below, gather your team, and get ready to battle!