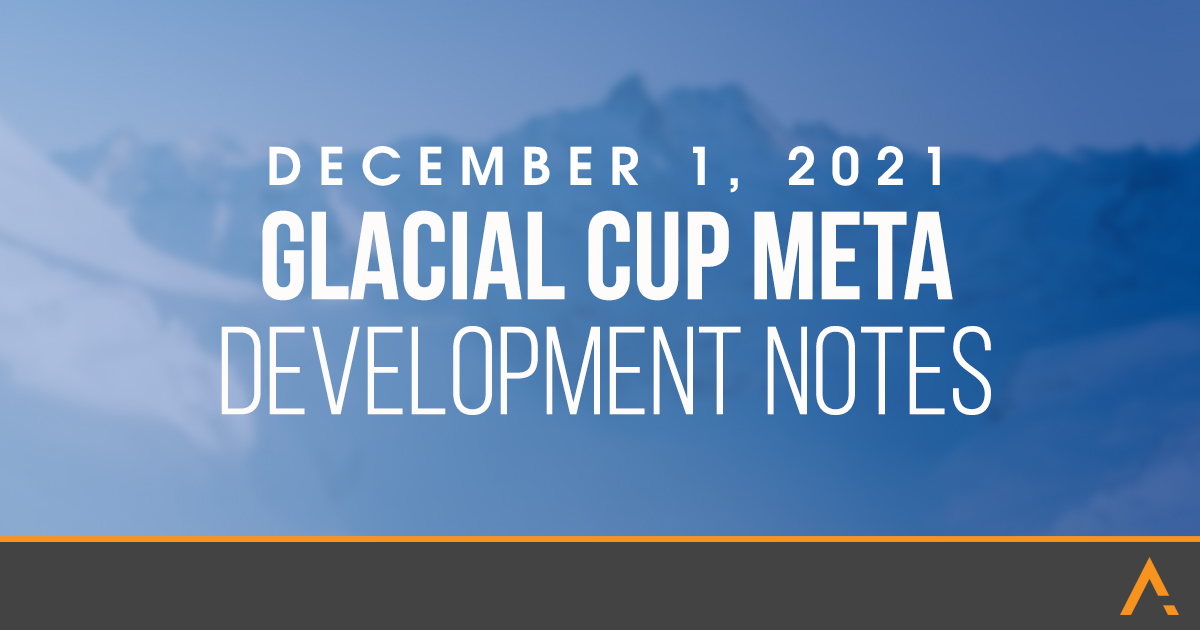 This game has many aspects that are capable of deciding the outcome, but for me it’s most exciting when they all come into play at a relatively equal level of importance – when the dynamics of Bastiodon outbulking 80% of the game and Rainy Castform beating Sunny Castform at a canter are removed, and energy management and timing come to the fore. What’s served up to us this December looks initially to me to be just that. WHAT WE’RE HOPING FOR

Dragons are interesting creatures. They get completely shut down vs fairies and struggle vs steels, which often means ice types, so often the ugly duckling of dragon counters by virtue of its horrific defensive set-up, get left by the wayside. Well for the chilly month of December, we want to see dragon and ice types step forward, adding water in as the primary way of countering ice types to fit the glacial theme.

Additionally, all five typings are mostly neutral or soft counters to each other, with no type pairing both dealing super effective damage and resisting damage of the opposing type. You may also notice that four out of five types resist damage from the same type, indicating that secondary typings could play an even larger role. For example, dark types, such as ZWEILOUS, DRAPION, and MALAMAR, and Steel types, such as SANDSLASH-A, JIRACHI, and EMPOLEON may end up leveraging their secondary typing here to become staples of the meta, while RAPIDASH-G could get its moment in the sun as the dominant fairy.

Psychic was added in for some neutral play, so for the first time this season we expect it to make its mark on the meta. Lastly we added poison as a way of adding some dark options to limit HYPNO and BRONZONG going wild with Confusion damage, while also adding answers to the potentially pesky ABOMASNOW that once again holds a unique role as an ice type that resists water.

With all this in mind, it was clear that the ban list may have to be longer than usual to give things a chance to flourish. Some things like the oppressive Charm or bulky fairy coverage on GARDEVOIR, NINETALES-A, AZUMARILL, and CRESSELIA, are fairly clear. Alongside this, Counter users that could’ve drowned out the waters as the primary way of beating down ice types have all been banned, leaving HAXORUS and ALAKAZAM as the only counter users in the cup and removing the potential for that dreaded Counter-Dark-Confusion RPS triangle that we’ve seen before! Aside from this the others have a bit more to them…

JELLICENT – Ghost/Water typing looks very strong here with the poison resistance and super effective STAB Shadow Ball’s to deal with psychics and other waters. On top of this, Jelli also has the capabilities of taking out dragons with Ice Beam and turning neutral matchups into dominant ones with Bubblebeam baits. All considered, Jelli has too many weapons to be allowed here.

LANTURN – Having access to STAB electric moves while also resisting water and ice, is a powerful weapon in the Glacial Cup. Unfortunately it also comes at the cost of being walled by Abomasnow and dragons, which, for better or for worse, makes Lanturn disruptive to what the aim of this cup is.

SWAMPERT – With counter users gone, mudboys could end up having an important role here when it comes to taking on the dark/poisons, but Swampert’s huge destructive potential with Hydro Cannon goes way over and above that.

ALTARIA – Similar to Jellicent, Altaria is amongst the bulkiest of the dragons and has a great largely unresisted STAB move in Sky Attack. We hope that by banning Altaria, more consideration is given to other dragons and how their second typings may help or hinder competitors while building their teams.

SANDSHREW-A – Alolan Sandslash is already well-placed in this meta, but having an alternative to it that has access to Night Slash diminished the strong neutral play of Psychic types, which combined with it’s accessibility issues, meant it got the ban hammer.

We’ve seen the Ice-Psychic-Poison type rules work well in the past, with Season 2’s Sorcerous Cup being amongst many competitors’ favourite cup so far, so if this Cup ends up being similarly well-balanced, I think we’ve got a Cup to look forward to.

That said, I think it’ll end up looking and feeling very different due to the array of secondary typings that come with water and dragon types. With dragon-heavy cups often having quite fast-paced games such as in Vortex Cup from Season 3 and Kingdom Cup from Silph’s inaugural season, for those of you who’ve been around long enough to remember it!