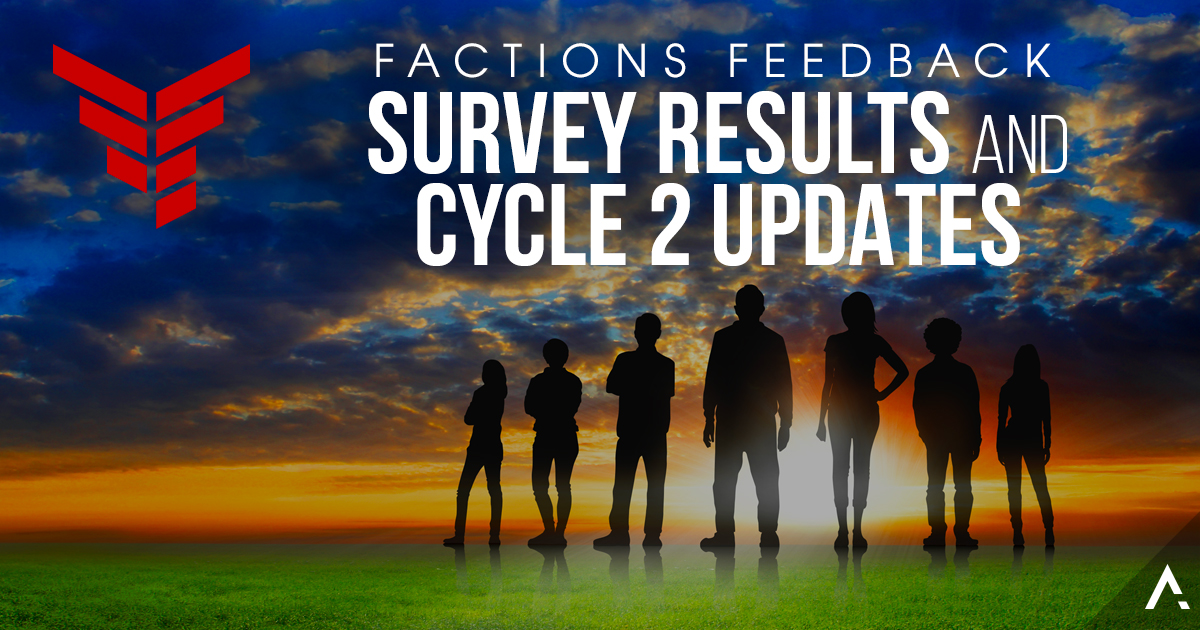 About a month ago, we asked the Captains of all active Factions to pass along a survey to their Master League and Ultra League Specialists. We’d been hearing from several Specialists that there were tweaks to the two big Open metas that they’d like to see, but sometimes it can be difficult to tell if suggestions are widely supported, or if just a few very vocal competitors are big fans. Luckily, your Factions Captains really came through, and with 348 total responses exclusively from the people dealing directly with the topic at hand, we were able to get a very interesting look into what is, and more importantly what isn’t working as well as it could be. In this article, we’re going to share some of those results, and share some of the changes we’re going to institute based on your feedback to try to improve your Factions experience:

The main complaint we’ve heard about Ultra League is that in the current Open meta, Legendaries and Starters may not have been weighted as strongly as they were at the inception of Factions. We were interested to know how Ultra Competitors would adapt this rule to account for the changing landscape, particularly in light of the rise of XL Pokémon in the league.

QUESTION 1: Would you like to see any changes in how the Starters/Legendaries are handled in Ultra League? There wasn’t the strong consensus on this one that we’d hoped there might be. Depending on the demographic, the answers varied dramatically. One thing that did appear in the comments, however, was that the problem didn’t necessarily reside in Starters or Legendaries, but in a concentrated meta of extremely powerful XL Pokémon that have moved in to take the place once exclusively occupied by the likes of Swampert, Cresselia, and Giratina.

To solve the issue that seemed to be bothering the bulk of Ultra League Specialists, we brought these answers and comments to the Meta team, who set to re-evaluating the limiting process. What they came up with is what we are going to try as a new ruleset for the next cycle as a test run, to see if it helps offset the problems everyone is experiencing. Rather than a blanket Starter/Legendary list, the Meta team has curated a Restricted List, from which Ultra League Specialists will be permitted to select a maximum of 2 Pokémon when building their team of 6. The thinking is that this way, strong cores you may be used to can remain intact, but no longer can everyone run Umbreon, Galarian Stunfisk, Talonflame, and Jellicent, because you can only bring 2 of them at once. Our hope is this will broaden the meta and provide a more interesting experience for everyone without ruining anyone’s hard work, or restricting gameplay too extensively.

Barring any edits from the Meta team prior to the start of the Cycle, the Restricted list from which you may select TWO of the following: Giratina Altered, Cresselia, Deoxys Defense, Registeel, Talonflame, Galarian Stunfisk, Mandibuzz, Umbreon, Swampert, Alolan Ninetales, Jellicent, Scrafty, Nidoqueen, and Cofagrigus.

When the Cycle comes to a close (or perhaps before then) we will likely be asking Ultra League Specialists to fill out another survey to see how you’re liking the changes, and see if we need to head back to the drawing board or not!

QUESTION 2: Are you interested in themed cups (restricted metas) in Ultra League? This one was actually a bit surprising to all of us. 73% is a fairly overwhelming majority interested in Ultra League Themed Cups. The Meta team is certainly excited about this, and the gears are already turning. We’ll be working on something in the future for you, because those are numbers we can’t ignore.

Master League was a little more straightforward than Ultra League in terms of what people want: keep it the same, or add more Legendaries. This question was actually the main reason we started the survey, because a pretty solid number of Master League Specialists reached out about the possibility of adding Legendaries to open up the meta a bit. This is obviously a concern because while we want the meta to stay fresh and interesting for players that battle in it weekly, we also have to keep in mind the steep costs associated with preparing additional Pokémon for those battles.

QUESTION 1: How many legendary/mythical Pokémon would you like to see allowed in Master League? With Master League, just like Ultra, there was variation across demographics, but unlike Ultra, one pattern did emerge pretty quickly: only three of 10 groups did not select “Increase to two” as their first choice (Open/Qualifying, Gold Tiers. and LATAM), and in all 3 cases, it was a close second. However, taken with the “unlimited” option, there was no demographic where less than half the players favored increasing the number of legendaries, two to one overall.

Just like the question, the solution to this is more straightforward. Majority rules, we are going to try a cycle increasing the number of allowed Legendaries to two and see how it goes. There’s always the risk that the meta won’t actually expand, it will just shift to be just as small, but with a different set of Pokémon, but for now we choose to be optimistic and wait to see what happens.

QUESTION 2: Are you interested in themed cups (restricted metas) in Master League? Less enthusiastic than Ultra (except for APAC, who are up for anything apparently!), we’ll likely be holding off a bit before introducing themed Master League metas. Honestly, from the comments, I am personally not 100% certain that a good chunk of respondents to this question didn’t take “restricted meta” to mean “Master League Classic,” which it does not. If the water testing with Ultra League metas goes well, perhaps we’ll expand into Master a bit.

And there you have it: be careful what you wish for because now you’ve got to farm the dust to pay for it! We hope these changes will improve Factions for all of you, and appreciate you taking the time to respond to the survey so we can get a better idea of how things are going in the day-to-day of the average Competitor. And thank your Captains for keeping these kinds of things organized, none of this would function without them. See you out there on the field!

But that’s not all…While it wasn’t part of the survey, we have heard quite a bit of feedback regarding the desire for an additional Alternate spot due to the longer Cycle length required for an 8-Faction Round-robin format. We’re happy to announce that alongside the Master and Ultra League changes we will be test running in Cycle 2, we will also be adding this second Alternate position. Bear in mind, this has NO IMPACT on the day-to-day functionality of your Faction’s battles. The weekly schedule remains unchanged, you still only have one day to edit your lineups, and you may not – not for any reason – substitute a player after the window has closed. All this change provides is one extra person for you to choose from when you are selecting your 7 Specialists for the week. Factions are still only required to have 7, but may now have up to 9 current members. We hope this helps alleviate some of the scheduling difficulties experienced this Cycle.