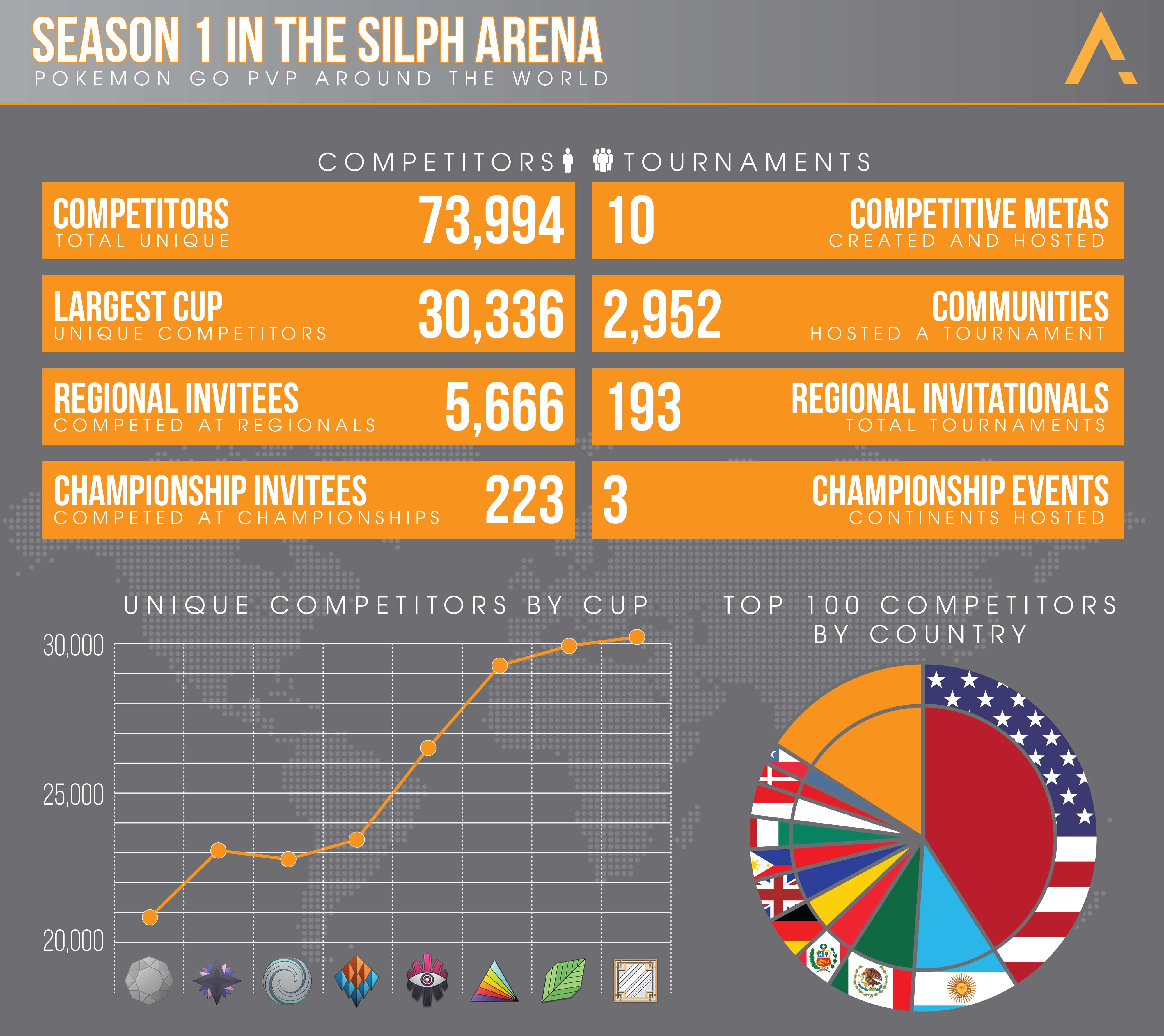 From all of us at the Silph Arena, thank you for an amazing 8 months in the Arena! Season 1 has been full of epic experiences and memories (and plenty of learning experiences!) and we look forward to all the great things we’ll be able to share with you in Season 2.

So much has happened since that first Boulder Cup, it’s hard to believe it hasn’t even been a whole year yet.

The road to the Championships was grueling and the competition only got tougher once the world’s most elite trainers arrived. But when the dust settled just three competitors remained:

These three unstoppable trainers will now have their names emblazoned on the Silph Arena Champion’s Cup forever, and take their place in the newly opened Arena Hall of Champions!

The Hall of Champions is Now Open

To celebrate some of the most important and talented competitors, contributors, and accomplishments of the first season, the top competitors from Season 1 will be immortalized in the new Hall of Champions! These include the three Arena Season Champions and our 193 Regional Champions! (More standouts will land in the Hall of Champions over the next few weeks, including the Championships Finalists!)

The Arena also has a few special keepsakes to award as mementos from Season 1! The final Season 1 rank calculations are underway, but once they finalize over the next few days, the following special collectibles will appear on Travelers Cards:

Season’s Stats at a Glance

Over the course of the season, a whopping 73,994 unique trainers participated in Official Silph Arena Tournament in nearly 3,000 different communities across the globe. There were over 4,500 completed Mirror Cups alone, the most intensely battled theme of Season 1!

The Arena consistently grew over the course of the season: nearly 10,000 more trainers competed in Mirror Cups than in Boulder Cups! With all of these trainers (and many new ones!) lining up to compete, we are very excited for Season 2. Thank you all for helping the Arena foster this remarkable competitive ecosystem with Pokemon Go trainer battles!

Here’s a look at the numbers: 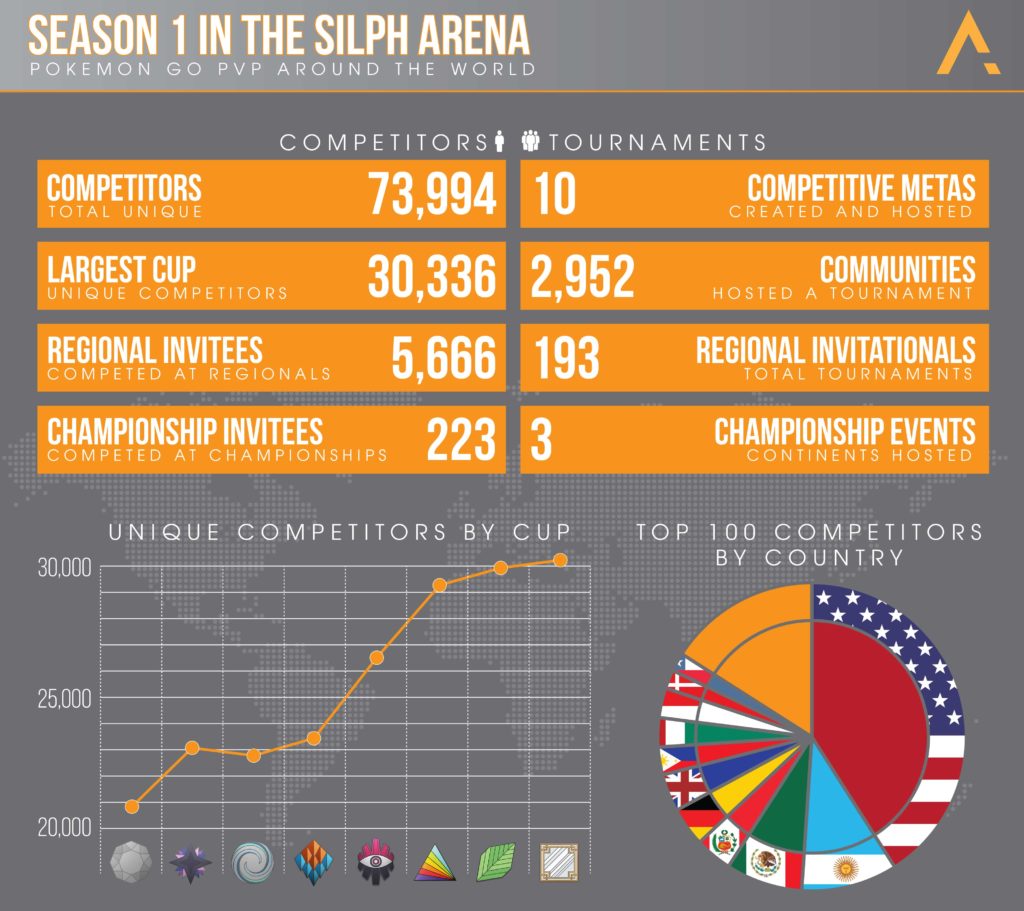 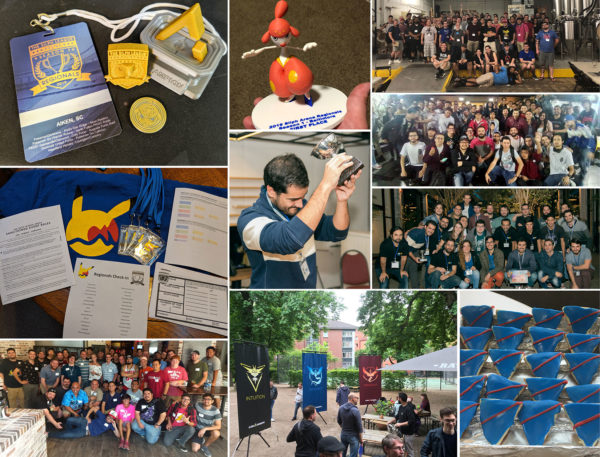 While the thousands of local community leaders who host tournaments for their communities are all heroes in our eyes, Season 1 Regional Hosts truly went above and beyond, organizing and administering HUGE crowds across the world (5,666 Regional competitors worldwide!) and overseeing the most competitive tournaments the world had seen to that point. We could not do this without you, so thank you for all you do from all of us at the Arena!

As a special thanks, we will be awarding the admins of Regionals host communities a special Travelers Card badge in the coming weeks. Keep up the great work, and we can’t wait to see the amazing events you throw in Season 2. (And the Arena team can’t wait to show how much more refined and smooth our processes and resources for hosts have become!)

Keep an eye on Silph.gg all September for more feature announcements, new helpful how-to guides, and other information to prepare you for the coming season! Just a few of the things on the horizon:

We’re proud of all who came and competed in the Arena this Season. Congratulations again to our Champions, both continental and regional, for earning a spot in the Hall of Champions.

The Arena team has grown and evolved along with the Season and we’re ready and eager to challenge the brightest battlers in communities around the world with new tests of strategy and skill. Season 2 is only a few short weeks away, so rest up and get ready to hit the Season in top form on October 1st! We’ll see you in the Arena.